Compass Cay, Staniel Cay, Big Major Cay
January 27 finds us at the very small, colorful Compass Cay Marina that appears to be a favorite stopover for mega yachts (two at a time) as it provides mega wattage.  This is another place that we need mid-tide of above to get into.
A dingy ride brought us a cave perfect for snorkeling exploration where stalactites reach towards stalagmites, and sea creatures appear to ignore the constant force of the waves.  I so regret that I do not have books on board for the identification or tropical fish and tropical birds.  The rainbow colored parrot fish, yellow snappers and striped sergeant major fish, pale in comparison to the multitudes of fish sporting neon blue, green and yellow arrays of intricate design.
In the spring, many of the Exumas Islands are home to nesting birds; given that it is winter, we have not seen many birds.
Low tide found us walking an endless expanse of sand flats festooned with sea life that has adapted to not being continually submerged in the sea; tolerating several hours, twice a day of low tide.   In a very small rivulet that was far from the water’s edge we delighted in finding a small skate who, with a ruffle of his wings, covered himself with sand and thus became invisible.  Conch and hermit crabs dwelling in whelk like shells are within arms reach while wadding in knee depth water.  Upon picking up a 3-4” whelk, I quickly put it back in the water when the aggressive, not so little crab, with the large claws and mighty reach, silently protested the intrusion.
High tide at the marina found Kurt in the water swimming with the nurse sharks (remember, the friendly ones with no teeth?) When the water is high enough that it covers one of the low docks, the occasional docile shark will swim onto the dock and invite back rubs from delighted humans.  What fun!! 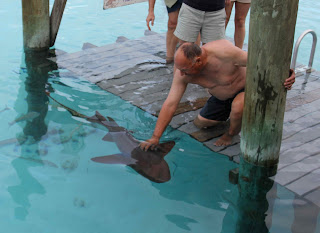 Have I mentioned that not only are we blessed to be experiencing all of this, but also the weather Gods have been beneficent.  Everyday brings clear skies, moderate winds and perfect temperatures in the high 70’s, low 80’s, with a dip to the 60’s at night for perfect sleep as we gently rock at anchor.
The stopover at the marina at Staniel Cay brought us an opportunity to explore via golf cart, and to re-provision at the three local grocery stores (bright pink, bright yellow and bright blue) on the island.  Between the three Easter-egg colored “supermarkets” we were able to buy eggs, half and half, lettuce, ice cream, tomatoes and beer!  The prices for each item were roughly double what they would be at home, but the good news is that the freighter from Nassau had just arrived so the produce was fresh. 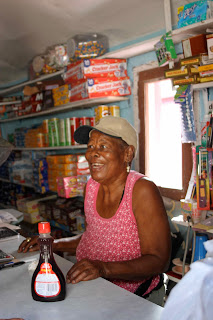 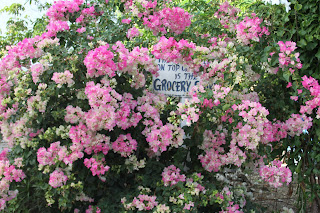 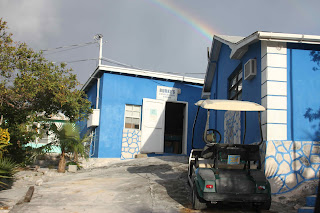 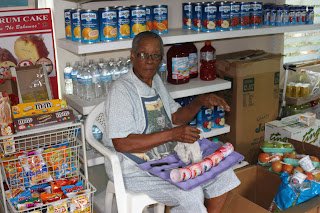 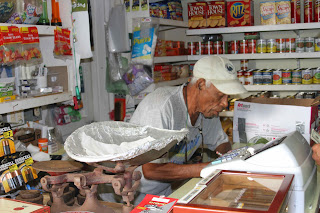 We bought coconut, whole wheat, and banana bread from the home (bright yellow) of the local “bread lady,” Titta Emil. She at least had the use of a stand-alone Kitchen Aid electric mixer in her tidy kitchen.  She was wearing a Cheeka Lodge tee shirt high end resort in Islamorada) and when asked, said that she vacationed there several times, apparently the “bread business provides her with a decent living. 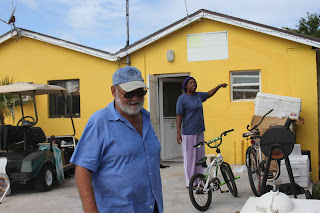 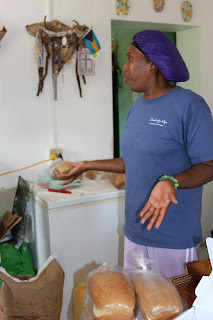 Staniel Cay is the most developed of the Islands that we have visited; modest, well kept homes were scattered throughout Island and there was one mega home being constructed at the top of a rise that provided for a 360 degree of the sea surrounding the Island.
The cruising guide notes that Staniel Cay is home to many rental properties because it “offers the easiest connections and best flights for friends and family to meet you in paradise.”   Kurt met a local pilot and when asked he quoted a price of $2,500 to fly to Ft. Lauderdale.
A short trip North from Staniel Cay brought us to a crowded anchorage at Big Major Island, home of the famous swimming wild pigs.  More on that later.
My carelessness while anchoring led to my footwear (Croc flip flop) descending to the sea with the anchor and the need for a short dingy ride to retrieve the floating footwear.  That led to a lengthy exploration by dingy to Sampson Cay Marina where we enjoyed a leisurely lunch of thin crust pizza and a couple of brews.  We introduced to the waiter the concept of mixing a bottle of the local beer, Kalik with a bottle of stout and what emerges is a yummy black and tan!  We clearly made his day.  The marina is a very lovely place worthy of a stop next time around.
Snorkeling at Thunderball Grotto, a spectacular skylit underwater cave was a highlight; fish resplendent with zillions neon colors and a piece of royal blue fan coral that was spectacular as it undulated and shimmered in the sun’s filtered light; a large grouper appeared the sentinel of the fan.
Back at the anchorage it was late afternoon and the swine were on the beach impatiently waiting for handouts from dingy occupants.  Not wanting to disappoint them we brought an offering of carrots and enjoyed (with a little trepidation, it’s a good thing that there is no audio attached to photos) pitching carrot pieces to the swimming pigs that were bold enough to attempt to climb into the dingy.  To the trumpet of snorting, pig-protests, when the goodies were gone, the piggies swam back to shore.  Does it get better than this!!! 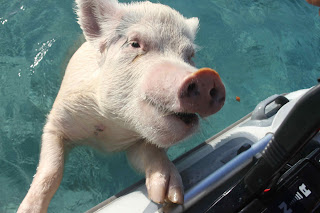 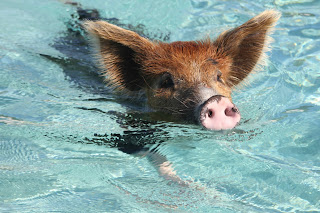 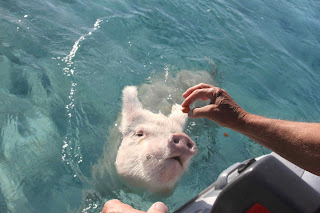 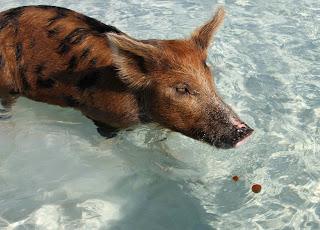